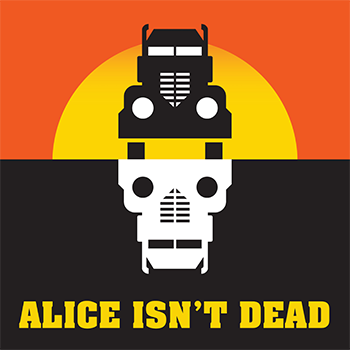 Devin is back with a review of the Alice Isn't Dead podcast.

Alice Isn’t Dead is a fiction podcast written by Joseph Fink and performed by Jasika Nicole. Here’s the basic premise: Keisha’s wife, Alice, has been missing for a while now. After a few incidences of watching the news and seeing flashes of Alice in crowds all over America, Keisha decides that her wife can’t be dead and becomes a trucker in order to search the country for her. America’s highways, however, are much more mysterious and dangerous than Keisha could have ever imagined.

There’s not much more I can say about the plot without some big spoilers. The twists and turns of this story are some of the best things about it. If you’re at all familiar with Joseph Fink’s work on Welcome to Night Vale, you won’t be disappointed by the eeriness he brings to this tale told through Keisha’s audio logs. If you're interested in long road trips and strange conspiracies, this podcast is for you!

General warnings: This podcast contains strong language and some graphic descriptions of violence and gore. It also dives deep into what it's like to have an anxiety disorder.

Want to learn more about podcasts? Check out Devin's Intro to Podcasts.